We invite all flamingos to participate in the wild race to the top of all score lists in Mingoville’s new virtual world for kids.

To celebrate the opening of our new virtual world, we give out 50 SuperLearnerships to the best English performing kids. This means that the kids that are on the top 10 ‘World’, ‘All Time’ score list in any of the games in Mingoville by July 12th, 2009 12:00 a.m. CET time win a 3-month SuperLearnership.

Who’s a SuperLearner? That’s a kid dedicated to becoming an English savvy flamingo while having a lot of fun. As a SuperLearner you can build the coolest flamingo in Mingoville, buy clothes and other things made available for the SuperLearner flamingos as they are keen on learning English. SuperLearners also get to try out all new areas before we introduce them to everybody else. Win a SuperLearnership and get exclusive access to the red carpet every time. 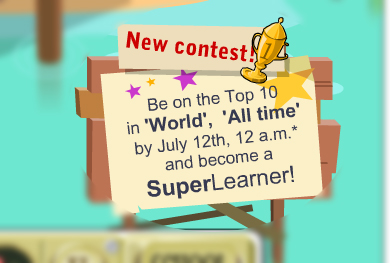 The rules of the Mingoville SuperLearner Championship are simple:

By playing one of the educational games in Mingoville, the kids will get points for their performance. To get on the top 10 ‘World’ ‘All time’ high score list you will have to have one of the 10 highest scores of the game. It means that you need to beat everyone else in the world to become a SuperLearner. 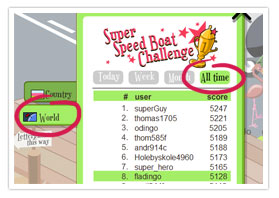 the Boat Race, in order to be amongst the top 10 you need to race all the laps and collect relevant English words by recognizing the images.

The Letter Game is all about spelling as many words as possible. The more difficult the word is the higher score you will get if spelled correctly.

The Concert Game is different from the other games because it requires the kids to record one of the 10 songs found in Mingoville School. After recording a song the kid selects the final version and plays it in front of his or her friends. To get on the top 10 ‘World’ ‘All time’ list, the kid has to make a lot of funky moves while the songs plays. During performance the kid may or may not receive a lot of applause from the audience depending how well he or she performs. The best moves and the ‘loudest’ applause will surely get the artist on top of the list.

20 thoughts on “Win the SuperLearner Championship of Mingoville Virtual World!”