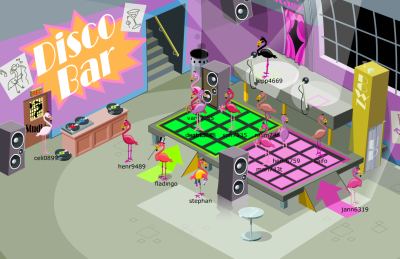 This week we launched The Club in Mingoville Virtual World where the kids are the stars. They can go in the Studio to record their song and then play it to their friends from the stage.

This is the second blog post in the series about our virtual English learning games. Last blog was about Quiz talk, if you missed it, read it here. This current blog will give parents and teachers an impression on what Super Star is. How do kids learn English playing SuperStar? SuperStar is located at The Club.

SuperStar is a Social Learning Game
In SuperStar, the student gives a live concert using one of his recorded songs from his “My Book” repertoire or by going in the studio to record a song from the song catalogue. All songs are in English and they all relate to the different mission themes in Mingoville e.g. The Body or My family. The songs wrap up the vocabulary of each mission and set it into a context in the lyric of the songs.

Super Star is based on the content the students generate just as The Quiz Talk. Furthermore, it’s developed around social learning principle as it requires an audience to give a concert. The more people come to your concert, the higher possibility of a loud applause which generates many points. All participants in SuperStar earn points based on their level of participation. The idea of developing a social learning game based on the work the students produce results in a high interaction and thus intensive immersion into the English language because the students are having fun while using the language. 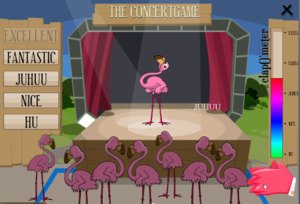 To play SuperStar, a student needs to record at least one of the 10 sing-a-long songs from the Mingoville karaoke album. The recording of a song can take place either as part of a mission or directly from the Studio in The Club. All songs produced will appear in the student’s “My Book” as part of the portfolio.

Future Releases
The game in itself is designed to motivate the students to practice vocabulary and a good pronunciation in a fun environment using media which is already very familiar to them. Future development could be the possibility of dressing your flamingo in different wardrobes related to stars, the integration of cell phones to record and upload songs and maybe even some video clips.

Log in and try the game yourself. What do you think? Comments and suggestions are as always welcome

30 thoughts on “Are You the New Star? Sing Your Heart Out in Mingoville Virtual World”