As some of you may have noticed we have kept Santa Claus very busy the past month. Since November, Santa and his elves have worked hard to make sure all the English learning kids in Mingoville could get a new Christmas gift every day. In order to help the kids learn English by e.g. practicing the dates in English, we asked Santa if he had time to help us out. The plan was to make

sure all kids would get a new gift every day, if they could find the date of the day.

We asked Santa to help us because the legend has it that he brings gifts to the homes of good children the day after Christmas Eve December 24th. There are so many good children in Mingoville devoted to learning English. We wanted to reward their effort and hoped Santa agreed with us – luckily he did 😉 Thanks to Santa we now have gifts to everybody entering Mingoville in December.

The Mingoville Christmas Calendar runs until December 25th. The dates are scattered around Mingoville and it’s all up to the children to explore the different areas and find the date of the day. When they step on the number, they get the gift which they can enjoy all of December.

We have heard that Santa lives in the far North, in a land covered by snow. Some says it’s the North Pole some says it’s in Finland. In Denmark, we believe he lives in Greenland. Where ever he lives, we know for a fact that Santa enjoys a few weeks of rest on his own Island in Mingoville before he kick starts his reindeer sleigh and begins his cruise to bring out gifts to all the nice and lovely children around the world. One of the coming days, the kids get an opportunity to visit Santa Island – when and where, is still a secret they have to discover for themselves. 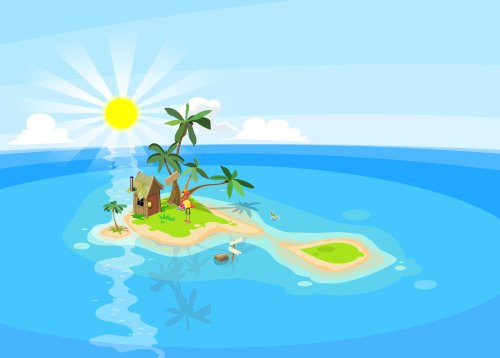 Some people oppose teaching children to believe in Santa Claus. According to Wikipedia some Christians say the Santa tradition detracts from the religious origins and purpose of Christmas. Other feels it’s an elaborate lie and thus unethical to teach the children to believe in him. Truth is, without consideration of any religion and without any intentions of offending other religions, we think it is a nice and cozy tradition that gives us an opportunity to spoil our dedicated students in English and reward them for their effort to learn English. At the same time, we teach them the English dates in a fun and engaging way. That’s all there is to it.

We wish you all a merry Christmas and see you at Santa Island in the near future. Santa sends his regards.