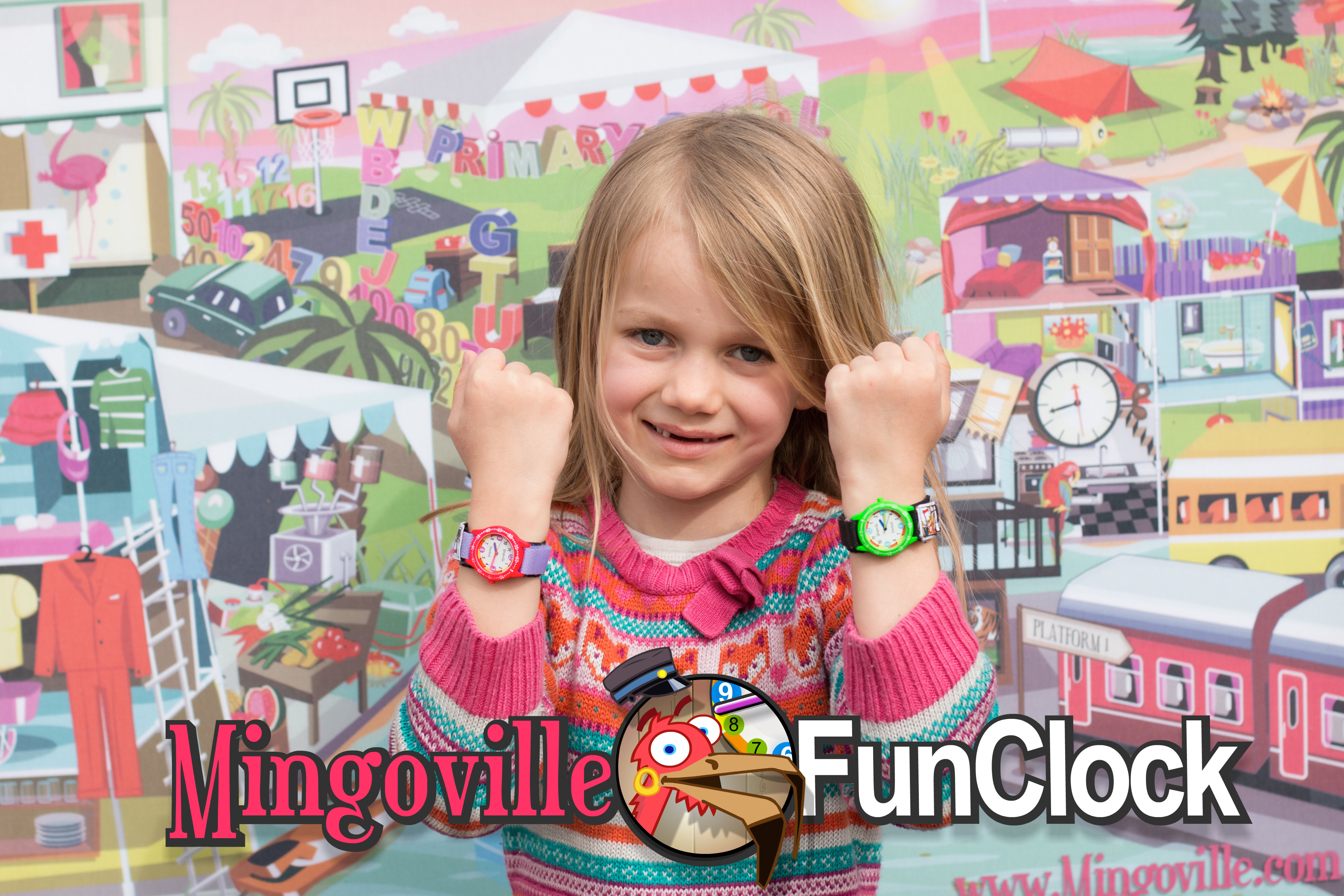 “We have been working for a decade in the field of primary digital education and we have noticed that at this young age children forget things really quickly. But if they learn by doing, the memory retention rate is up to 70%. That gave us the idea of completing the learning process of how to tell the time with the Mingoville Fun Clock App and with a real watch,” says Savivo’s CEO Stephan Stephensen.

As visual memory is very important for children, the Mingoville #EduWatch is specially designed to look like the clock in the Mingoville App, so children can make the connection between what they have seen in the app and the physical watch on their wrist. This also completes the natural process of learning how to tell the time with the Mingoville App and practicing the newly acquired skills with the #EduWatch.

With the launch of this Educational Indiegogo Project, Stephensen’s goal is to show that Edu games and projects can and should be as successful as entertaining games and high-tech gadgets.

“Indiegogo is already a popular crowd-funding platform for different gadgets and games, that are very successful. We want to prove that the Education section can compete with high-tech projects too. After all, since everyone cares about children’s education, what better platform than crowd-funding?” says Stephensen.

All the contributors for this project are rewarded with access to the Educational Games right away. The perk levels start at only $3, but no matter how much is pledged, there will be at least one digital game for every contributor.

“We believe our project has a worthy cause: promoting digital education. That is why we are happy to support it and give our games away. And we hope our contributors and fans will join the pledge too!” says Stephensen.

The #EduWatch comes in a variety of colors and the Indiegogo price starts at $25, whereas the expected retail price is $50. The goal of the project is to fund the production of the Mingoville #EduWatch, which is specially created for children. It is ready to handle the daily challenges of the playground: it is shock-resistant, waterproof (3ATM) and tested for Nickel allergies. The watch has a fast wrap strap, so even the youngest kids can easily put it on.

“We have the designs and prototypes ready. Now we just need to fund it!”, says Stephensen.

Interview – If you are interested, our CEO Stephan Stephensen, who is an international e-learning expert, will be happy to give a special interview for you via phone: +45 3333 8111 or skype: mingoville

The Man Behind the Project

A frequent guest speaker on e-learning, m-learning, digital education games technology, Stephan Stephensen founded Savivo in early 2000s in Copenhagen, Denmark, which was a milestone in revolutionizing English and Math learning in classrooms with award-winning mobile apps and web-based products.

His work has been recognized by awards such as the “Danish Mobile Award“ 2011 for making an extraordinary impact in mobile technology and the “Best MoBiz and Innovative Enterprise Award” at the Global Mobile Internet Conference, Beijing, China 2013.

Savivo is a digital educational provider. As an award-winning education e-games and apps developer, the company has the winning formula to create fun, innovative and savvy games for kids. Savivo’s best¬sellers include Mingoville English, Mondiso Math and Fun Clock.

As you might have seen, Savivo have just launched a campaign for the #EduWatch, the physical companion to our Mingoville Fun Clock App.

The means of achieving that goal is IndieGoGo, a crowdfunding website.

Crowdfunding is a novel and fairly new way of financing various projects. Crowdfunding is about going directly to the consumer and asking ”Do you like this project enough to pay for it, even if it doesn’t exist yet?” Thousands of enthusiasts, philanthropists and just people who wants to see something come true can band together, and make something come true. Big projects, ranging from software, books, music and movies have all been funded by crowdfunding, and now, if we have something to be said, education will be crowdfunded too.

What Is The Risk?

In our case, there is no risk. You won’t pay ANYTHING if our campaign fails. If we don’t reach our goal, you won’t miss a single cent. And when our campaign succeeds, we are ready to start producing the watches. Actually, as soon as our campaign is over, we will start getting the watches made. The prototypes are done, packaging is designed and we only need the last push.

What’s In It For Me?

Except for a watch for your child, and most of our products ready for use? If that isn’t enough, contribute to the campaign to show that educational content has its niche in the world of crowdfunding. Educating children is our most important task in the world, and if we can start by just crowdfunding a watch and the software, which will make learning easier, we’ve had a very good beginning.

Okay, I’m Convinced. Can I Help?

The biggest help you can give us, besides buying a watch, is by spreading the word. Share the project with friends, on your Facebook and let people know, that this is a good project. The more people who sees this, the better! If just north of 300 people want a watch, our campaign will succeed!

So visit our campaign here: http://bit.ly/1t2s8hN,  watch the Youtube video we’ve made below, and thank you for being interested in children’s education!

Savivo participated in the Danish Entrepreneurship Camp 2014 in Korea, where we attended high-level meetings with the Danish Minister for Trade and Development Cooperation Mogens Jensen, Samsung Executives and the Korean e-learning organizations Nipa and Kelia.

We are proud to share that we have 1 million downloaded apps.

Once upon a time, storytelling was the fabric that bound us together. The act of telling and retelling stories has always been part of human history. Telling stories is now making a comeback with Mingoville Storytelling, which combines education, entertainment and creativity. 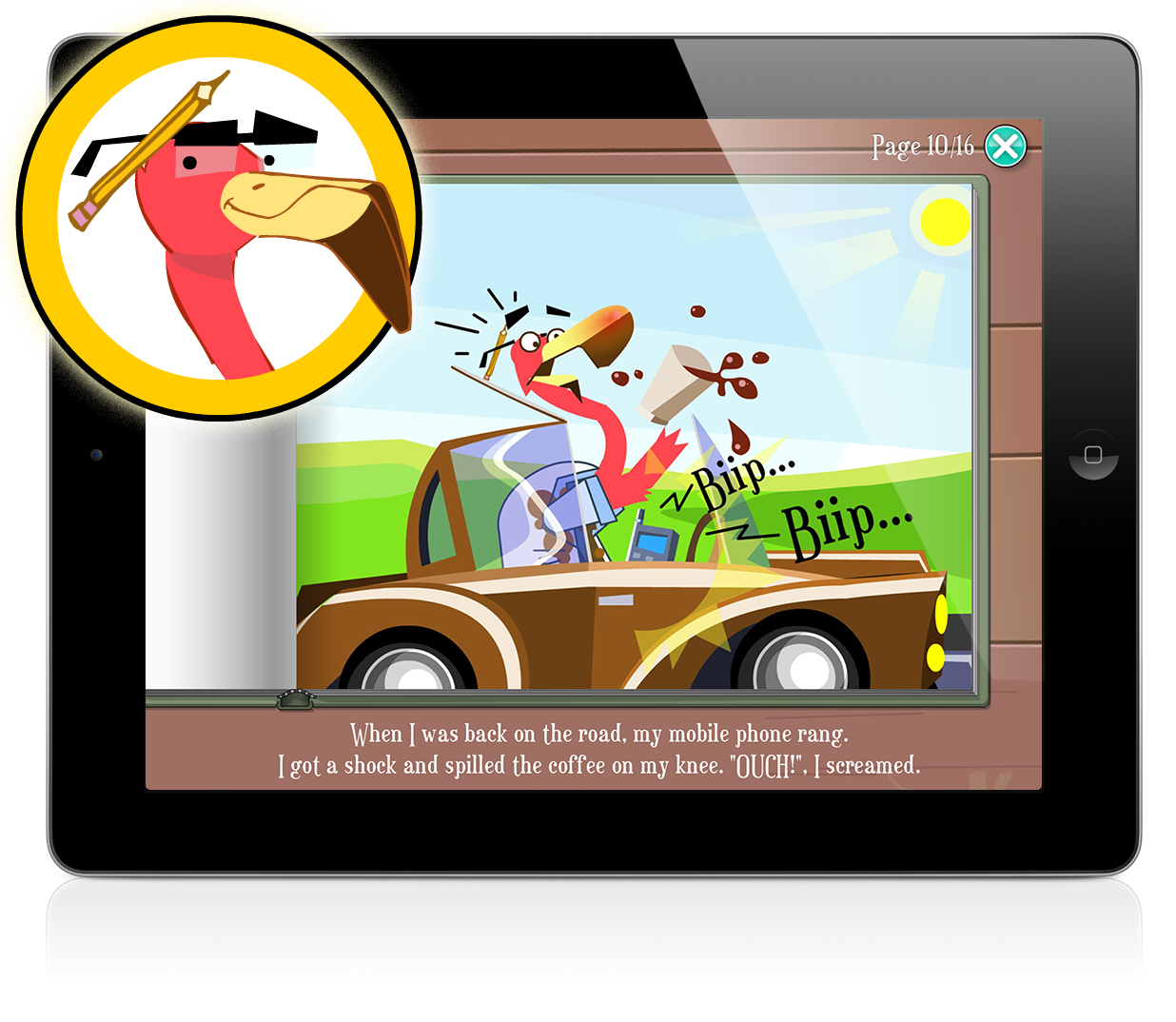 The latest app from the award-winning edutainment developer Savivo, Mingoville Storytelling is an app build on the principle that retelling stories help develop language in children. Mingoville Storytelling takes this technique and combines it with modern technology in the form of voice recording, colorful pictures and the ability to share stories via email.

The app contains 10 Mingoville stories, 160 images with eye-catching elements and narration by professional voice actors. This combination ensures that children are captivated, challenged and able to improve their reading, writing and listening skills. Children get to analyze stories for important elements and then use these elements to retell the story. And afterwards, they can tell a story of their own, using these 160 pictures in any combination.

CEO of Savivo, Stephan Stephensen, explains the importance of this approach: “Retelling as a educational tool has been used by some educators, especially those teaching English language learners. While it hasn’t enjoyed much time in the limelight, the technique is sound and has had positive feedback from researchers and educators around the world. We can’t wait to see what stories the children will come up with!”

Mingoville Storytelling allows children to create stories and share them, which makes the joy of telling and sharing much more approachable and immediate. Hearing stories, retelling them, creating them and sharing them has never been easier or more entertaining.

Here at Savivo we’re happy to talk about our next educational program. We call it Mingoville Storytelling, and it will be released very soon.

Mingoville Storytelling will use stories as the vehicle for learning. In the app, children will hear stories set in the Mingoville universe, retell them and even compose their own stories. 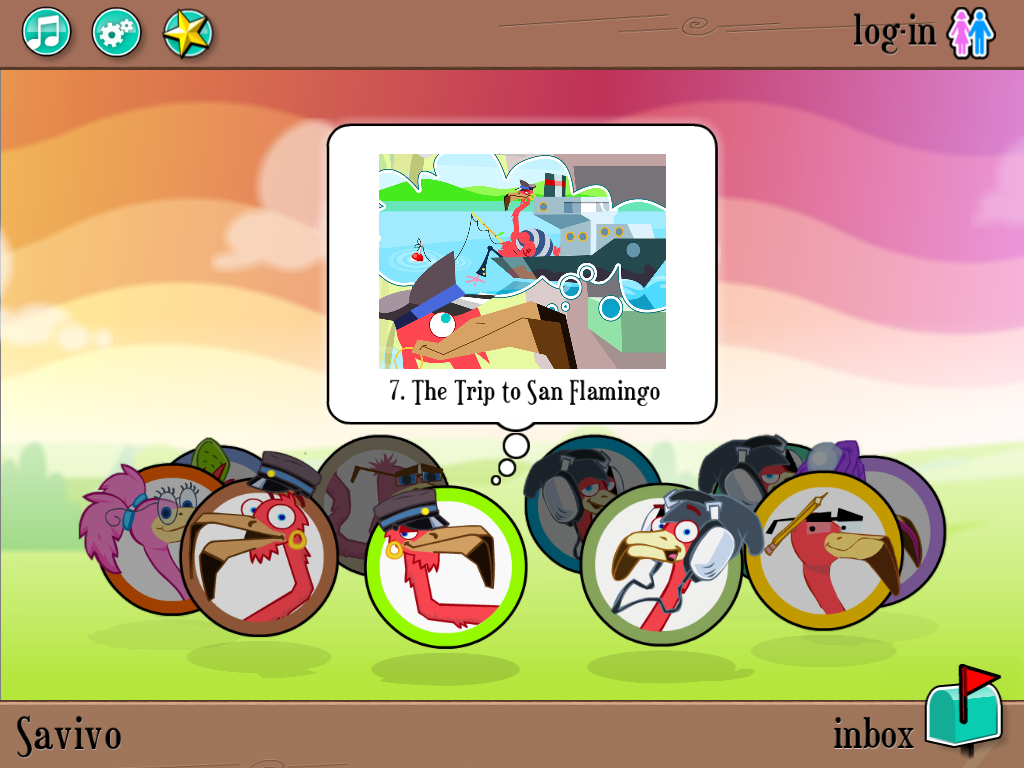 Retelling as an educational concept is not a new language-learning concept, but we’ve combined it with beautiful pictures, professional voice acting and the ability to write and record customized stories.

The app contains 10 stories for the children to listen to. After having heard a story, the child is asked to tell the story again, using the pictures as help. This will encourage children to analyze the told story, combine the important story events with the descriptive pictures, and then use those elements to retell the story as accurately as possible. This will train children’s memory, vocabulary and encourage better reading comprehension and writing.

The last component of the app is the option to tell stories. The children can use any of the unlocked pictures, 160 in total, to tell stories of their own devising. When a picture has been picked, the children can write an accompanying story. If they want to, they can also record their own narration.
When they are finished telling a story, and trust us, it won’t be their only one, they can share it with friends and family in different ways. They can send a mail through the app or they can generate a Book Code, a combination of six letters, which gives access to the story. These codes can be shared easily through email, texts, Facebook or just handwritten notes, and we hope to see many interesting stories both made and shared using Mingoville Storytelling. 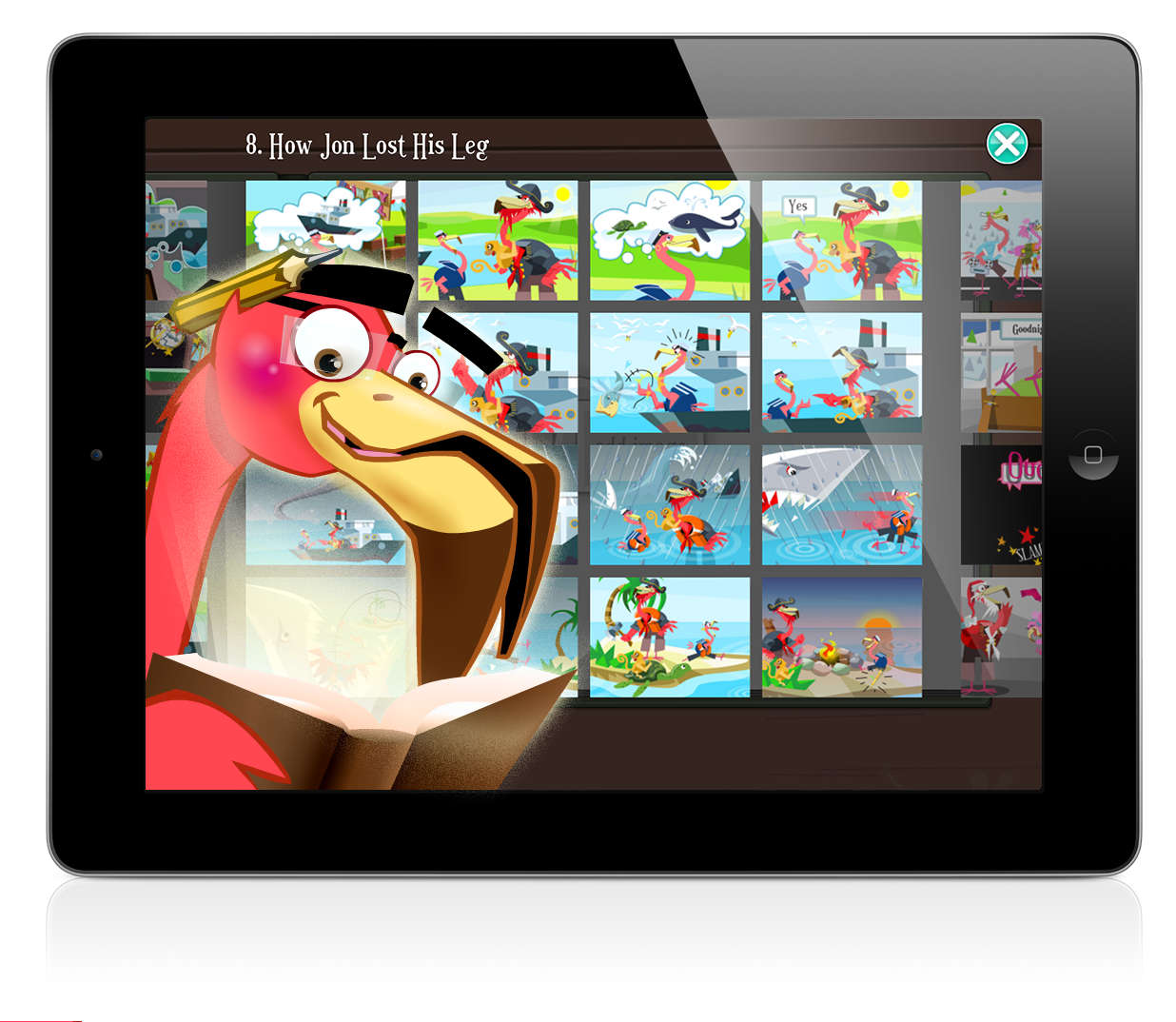 We’re sure that children trying this app will improve their English by retelling and making their own stories. We can’t wait to see what kind of stories will be made, when Mingoville Storytelling is released. We’ll let you know when it’s ready!

Latin America has seen a rise in tablet sales during the last couple of years. The market research firm International Data Corporation predicts that emerging markets such as Latin America will grow to 51% of the worldwide market by 2017. With that in mind, it can’t come as a surprise that tablet-based education is on the rise in the region.

In countries like Panama, the government is running an ambitious tech campaign “Bring Your Own Device”. In the meantime Intel is considering bringing many new tablets models to the Latin American market. The development can be felt also subtler ways: for example in the online app sales.

English apps are among the most popular. That can be felt from developers across the globe. One of the leading worldwide educational providers is the Danish-based firm Savivo. Currently the company’s Preschool English application is number 1 in the Costa Rican educational iTunes store and can be found on the Top Ten lists in several Latin American countries.

Stephan Stephensen, CEO of Savivo, has recently seen a significant growth in sales of educational apps in Latin America. In his opinion, digital education is affordable and easy to use and it has the potential to bring education to as many children across the world as possible.

“The philosophy of Savivo is that education is for everyone. With the booming market of tablets and educational apps, we might be a step closer to that reality.”

The spread of tablets in the region has given occasion to a rise in downloads of educational apps. If anyone benefit from this development, it’s the children.
The combination of ease of use and comfort makes the discovery and use of suitable apps ideal for education in Latin America.